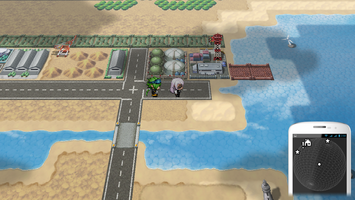 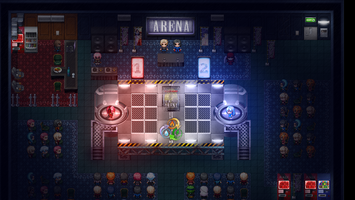 Hey all, I have a bunch of new screenshots!

As I said in a reply to a comment last week, it's difficult for me to take screenshots. With the game being a graphic adventure of sorts, it's easy to accidentally produce huge spoilers. Still, I wanted to show you guys some stuff.

The first is part of the explorable overworld of NALE's location, Fledge City. You've seen this before in a bunch of stuff, like in the previous chapter's intro, but that didn't convey that the location is actually quite large, with multiple districts. This is the industrial area, which becomes important during the case. Eagle-eyed fans will notice the red and white tower; this is actually the location where Anya was arrested at the end of Chapter 1.

The second shot shows the finished version of the arena I showed you guys before, now with final lighting. This is the first time the player visits this location, though you come back here multiple times.

Finally, the third shot shows the DFA card-game & anime convention that forms most of the chapter's locations. This image is dominated by the duelling tables, but you can also see a bit of the cosplay area poking in the top-left corner. This con is loosely based on a bunch of real-life events; anyone who attends anime & gaming conventions should spot a bunch of little references and in-jokes that I hope you guys will love.

Thanks guys, hope you like these and I'll try to have more soon!

Fight for justice in Chapter II of this anime-themed graphic adventure game!